3D
Scan The World
1,354 views 82 downloads
Community Prints Add your picture
Be the first to share a picture of this printed object
0 comments

Marcus Aurelius (121–180 AD) was Roman emperor from 161 to 180. He ruled alongside his adoptive brother, Lucius Verus, until 169 and then alongside his son, Commodus, from 177. He was the last of the rulers traditionally known as the Five Good Emperors, ending Roman Empire's most peaceful and prominent era.

He is known for being a serious man, which is visible even in the stern expression of this portrait of Marcus as a youth. His philosophical writings, which later came to be called Meditations, are a significant source of the modern understanding of ancient Stoic philosophy and they have been recognised as one of the greatest works of philosophy. 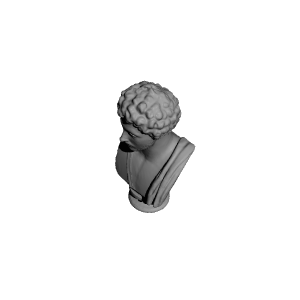