Margaret of Anjou at the Jardin du Luxembourg, Paris

Margaret of Anjou at the Jardin du Luxembourg, Paris

Margaret of Anjou (French: Marguerite; 23 March 1430 – 25 August 1482) was the wife of King Henry VI of England. As such, she wasQueen of England from 1445 to 1461 and again from 1470 to 1471. Born in the Duchy of Lorraine, into the House of Valois-Anjou, Margaret was the second eldest daughter of René I of Naples and Isabella, Duchess of Lorraine.

She was one of the principal figures in the series of dynastic civil wars known as the Wars of the Roses and at times personally led theLancastrian faction. Due to her husband's frequent bouts of insanity, Margaret ruled the kingdom in his place. It was she who called for a Great Council in May 1455 that excluded the Yorkist faction headed byRichard, Duke of York, and thus provided the spark that ignited a civil conflict that lasted for over thirty years, decimated the old nobility of England, and caused the deaths of thousands of men, including her only son Edward of Westminster, Prince of Wales, at the Battle of Tewkesbury in 1471.

Margaret was taken prisoner by the victorious Yorkists after the Lancastrian defeat at Tewkesbury. In 1475, she was ransomed by her cousin, King Louis XI of France. She went to live in France as a poor relation of the French king, and she died there at the age of 52. 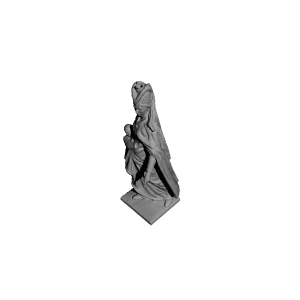 ×
1 collections where you can find Margaret of Anjou at the Jardin du Luxembourg, Paris by Scan The World
×
Alf Scherer
@scherera
1
Printed on: Ultimaker 2+
Material: PLA
Posted at: 21st January 2022

Margaret of Anjou is one of those people that I hear about and become curious about what she could have really looked like. Here is your scan with some paint added - mostly imagination plus some old paintings. Thank you so much for the scan !