3D
360°
Scan The World
2,423 views 333 downloads
1 collection
Community Prints Add your picture
Be the first to share a picture of this printed object
0 comments

The Russian Princess Maria Barjatinskaja (1793-1858) came to Rome in 1818 with her husband. On his wish she was modelled by Thorvaldsen. The marble sculpture was created in 1821-25 but was never sent off. After the death of the Princess her family demanded to have the statue handed over, but instead accepted a copy made by Thorvaldsen’s most important Danish apprentice, the sculptor H. W. Bissen. Today the sculpture is in the Pusjkin Museum in Moscow. The statue is one of the best examples of Thorvaldsen’s special ability to portray a figure in calm thoughtfulness. An introverted character that seems to ignore everything outside the sculpture itself and simultaneously gives the impression of great dignity, personal balance and knowledge about the world in the one portrayed. 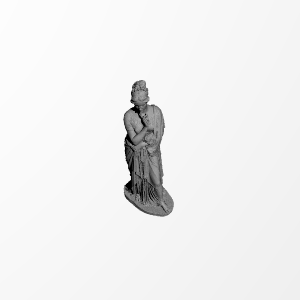 ×
1 collections where you can find Maria Fjodorovna Barjatinskaja by Thorvaldsen