3D
Scan The World
3,708 views 202 downloads
Community Prints Add your picture
Be the first to share a picture of this printed object
0 comments

Telling his wife, whom he left in France, that "the welfare of America is ultimately connected with the happiness of all mankind," the nineteen-year-old Marquis de Lafayette arrived to fight for the cause of liberty in early 1777. His moment of glory came during the Yorktown campaign, when he cut off General Cornwallis's path of retreat. An appreciative Virginia legislature commissioned his bust, and Lafayette is seen here in the uniform of a major general in the Continental army, displaying the badge of the Order of the Cincinnati, the fraternal society which united Washington's officers. 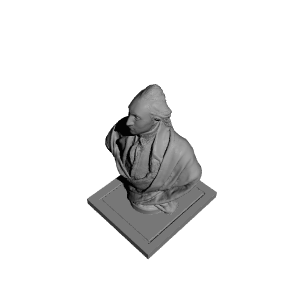 ×
0 collections where you can find Marquis de Lafayette by 3DLirious