3D
360°
Scan The World
3,758 views 435 downloads
3 collections
Community Prints Add your picture
Be the first to share a picture of this printed object
1 comments

This is a sculpture of Mary, mother of Jesus, crying from the church of San Canziano.

Mary was a 1st-century BC Galilean Jewish woman of Nazareth, and the mother of Jesus, according to the New Testament and the Quran.

The gospels of Matthew and Luke in the New Testament and the Quran describe Mary as a virgin; according to Christian theology she conceived Jesus through the Holy Spirit while still a virgin. The miraculous conception took place when she was already betrothed to Joseph. She accompanied Joseph to Bethlehem, where Jesus was born.

The Gospel of Luke begins its account of Mary's life with the Annunciation, when the angel Gabriel appeared to Mary and announced her divine selection to be the mother of Jesus. According to canonical gospel accounts, Mary was present at the crucifixion and is depicted as a member of the early Christian community in Jerusalem. According to Catholic and Orthodox teachings, at the end of her earthly life her body was raised directly into Heaven; this is known in the Christian West as the Assumption. 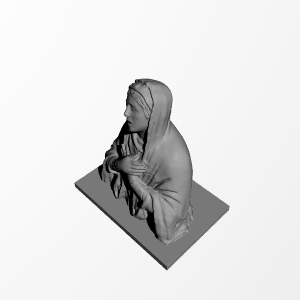