3D
Scan The World
10,151 views 701 downloads
12 collections
Community Prints Add your picture
Be the first to share a picture of this printed object
4 comments

Niccoló dell'Arca was mentioned for the first time in September 1462 in Bologna as Maestro Nicolò da Puglia, a “master of terracotta figures”. This probably refers to the “Compianto sul Cristo morto”, terracotta group in the Sanctuary of Santa Maria della Vita in Bologna (also mentioned in a Bull of 1464 by Pope Paul II). A life-size group of six separate figures stand lamenting in a semicircle around the dead Christ in a lying posture. The dramatic pathos, the expressions of grief and torment of the figures is intensified by the realism of their dramatic facial details. However the date of this innovative contribution to Renaissance sculpture is uncertain. Instead of c. 1460, some date it between 1485 and 1490.

Although these figures in the sculptural group were originally painted, today, they are now pretty much in the unpainted terra cotta state. Still the powerfully expressively quality, reminiscent of Northern Gothic art, remains. The figures represent, of course, those who were present at Christ's entombment, although the Biblical versions are not entirely consistent. Present in this grouping are from left to right: Joseph of Arimathea (not pictured here), Mary (Salome--the mother of John the Evangelist), the Virgin Mary, John, Mary (of Cleophas--Mother of James the Lesser), and Mary Magdalen.

One of the main characters or the main one of this incredible group is, in fact, Mary Magdalen. Her dramatic grief is enhanced by the artist giving her exaggerated gestures, expressive hands, flying robe and head scarf, wailing mouth--all combine to signify a horrified and explosive sorrow. In spite of clothing that appears heavy in the terra cotta, the Magdalen's sexual power and appeal is still apparent.

Niccolo dell'Arca's treatment of drapery - taken from classical Greek sculptors - is especially dramatic here, with the robes of the grieving women flying out behind them. The size of the figures around Christ's dead body, together with their realism and their distressed states would have made this installation a heart-stopping sight for worshippers in the church.

It was the use of terracotta, as opposed to marble or bronze, which allowed the artist to create more expressive works. This sculpture may very well have influenced a similar work - Lamentation (1492-94) by Guido Mazzoni, at the Church of Monteoliveto, Naples. 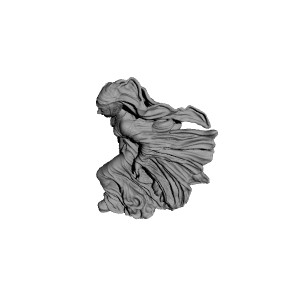