Mary of Clopas from the Mourning of the dead Christ

3D
Scan The World
5,971 views 246 downloads
4 collections
Community Prints Add your picture
Be the first to share a picture of this printed object
0 comments

Mary of Clopas from the Mourning of the dead Christ

This statue is part of a set of 7 characters in a scene entitled "the Mourning of the dead Christ" made by Niccolò dell'Arca in the end of the 15th century and kept in Bologna in the Sanctuary of Santa Maria della Vita.

This unknown masterpiece strikes the spectator with both its realism and expressionism – perhaps the realism of the expressionist aspect of grief and despair. It seems that the intensity of grief goes crescendo from left to right: here, Mary of Clopas, situated on the right of the group has an intense expression of sorrow.

Her arched body and her hands give the impression that she wants to push away the image of the dead Christ, whereas her mouth echoes a loud scream. The overall impression is all the more emphasized by her draped clothing and her veil, flying behind her, giving more intensity to each one of her gestures.

Mary of Clopas is explicitly mentioned in the Bible as one of the women present at the Crucifixion of Jesus: "

Now there stood by the cross of Jesus His mother, and His mother’s sister, Mary [the wife] of Clopas, and Mary Magdalene." (John 19:25) 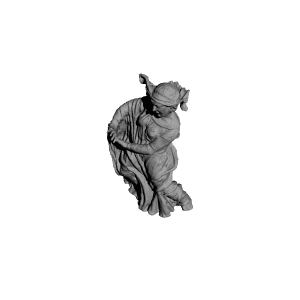