Mask 14 at The British Museum, London

3D
Scan The World
1,726 views 80 downloads
Community Prints Add your picture
Be the first to share a picture of this printed object
0 comments

Mask 14 at The British Museum, London

Among the Kalabari Ijo peoples, who live in the delta area of the lower Niger River in Nigeria, important rituals honor and appease water spirits, who were believed responsible for ensuring the Ijo's food supply and their fertility. This wooden mask represents one of these water spirits, otobo (hippopotamus). When worn the mask was positioned on the top of the head and decorated with feathers and cloth.

African masks were used not only for enternainment and ceremony but also to bring the powers of the wild bush and swamps into the civilized area of town and village so that humans can interact with them and use their dangerous forces and social ends. Characters commonly inbolbed in such powerful masquerades are wild beasts, spirits, foreigners, witches or the dead. 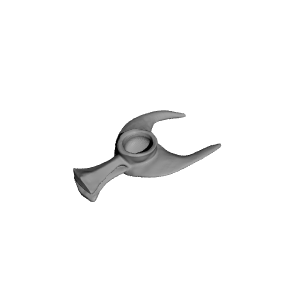 ×
0 collections where you can find Mask 14 at The British Museum, London by Scan The World