Mask of the Mourner and Centaurs (The Gates of Hell)

3D
Scan The World
2,063 views 140 downloads
1 collection
Community Prints Add your picture
Be the first to share a picture of this printed object
0 comments

Mask of the Mourner and Centaurs (The Gates of Hell)

This is a plaster bas-relief depicting a fragment of the Gates of Hell, monumental sculptural group work that depicts a scene from the Inferno, the first section of Dante Alighieri's Divine Comedy. It stands at 6 metres high, 4 metres wide and 1 metre deep and contains 180 figures.

This particular fragment pictures the mask of the Mourner and Centaurs. The weeping woman has the unsettling effect of many late 19th-century symbolist works. She is flanked by centaurs, a recurring feature in Rodin's menagerie of mythical creatures drawn from antiquity. Representing the dark side of human nature, they amplify the otherworldliness of the mask-like face. 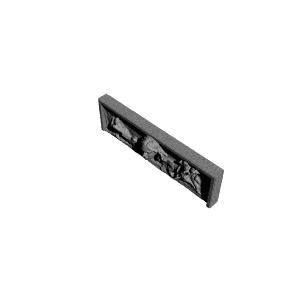