3D
Scan The World
4,227 views 196 downloads
Community Prints Add your picture
Be the first to share a picture of this printed object
0 comments

According to an article in the Art Union for 1847, in 1823 Baily exhibited a plaster model of this composition, but no commission for a large marble resulted. Undeterred, he carved one in marble the following year. On finding himself unable to sell it, he arranged to dispose of it by lottery, along with another, smaller work. Only half the lottery tickets were sold (amounting to £550 for Baily). They included the one for the smaller work, but not the ticket for Maternal affection. The winner of the smaller work turned out to be the wealthy Duke of Buccleugh. The determined Baily finally managed to dispose of Maternal affection for £350 in a private sale to Joseph Neeld, a director of a silversmith company. But there appears to be some discrepancy in this Art Union account. Baily exhibited a work entitled Affection etc at the Royal Academy in London in 1823 (item no. 1102); in 1825 he exhibited Affection: a group at London's British Institution (item no. 410), possibly the same piece. Not until 1837 did he show Group, Maternal Affection' at the Royal Academy (item no. 1179), which was probably this piece. It was later purchased by Joseph Neeld, in whose collection it remained at Grittleton House, Wiltshire, until its sale in 1964, when it was acquired by the V&A. Another version - and there may be others - is in the Fitzwilliam Museum, Cambridge. It is signed and dated '1841'. Maternal affection was also reproduced in multiples in reduced format in Parian ware (a granular white porcelain). Even so, Baily's best-known sculpture has to be the figure of Lord Nelson that stands on the high column in London's Trafalgar Square.

Edward Hodges Baily (1788-1867) was an English sculptor and designer. As son of a ship’s carver he began his career as a modeller in wax. He spent seven years in John Flaxman’s studio, acknowledged as his favourite and most devoted pupil. He attended the Royal Academy Schools. He is the sculptor of the Nelson on Nelson's Column, of ca. half the sculpture for Marble Arch, some of the exterior work on Buckingham Palace, and a number of monuments in St Paul's and Westminster Abbey, just to name a few. The work that brought him fame was Eve at the Fountain first shown 1818 at the Royal Academy. 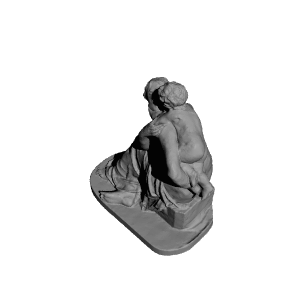 ×
0 collections where you can find Maternal Affection by vam