Mathilde of Flanders at The Jardin du Luxembourg, Paris

3D
Scan The World
2,627 views 144 downloads
1 collection
Community Prints Add your picture
Be the first to share a picture of this printed object
0 comments

Mathilde of Flanders at The Jardin du Luxembourg, Paris

"Matilda of Flanders (c. 1031 – 2 November 1083) was the wife of William the Conqueror and, as such, Queen of England. She bore William nine children, including two kings, William II and Henry I. Matilda, or Maud, was the daughter of Baldwin V, Count of Flanders and Adèle of France, herself daughter of Robert II of France. According to legend, when Duke William II of Normandy (later known as William the Conqueror) sent his representative to ask for Matilda's hand in marriage, she told the representative that she was far too high-born to consider marrying a bastard. After hearing this response, William rode from Normandy to Bruges, found Matilda on her way to church, dragged her off her horse by her long braids, threw her down in the street in front of her flabbergasted attendants and rode off. Another version of the story states that William rode to Matilda's father's house in Lille, threw her to the ground in her room (again, by her braids), and hit her (or violently battered her) before leaving. Naturally, Baldwin took offense at this but, before they could draw swords, Matilda settled the matter by refusing to marry anyone but William; even a papal ban by Pope Leo IX at the Council of Reims on the grounds of consanguinity did not dissuade her. William and Matilda were married after a delay in c. 1051-2. A papal dispensation was finally awarded in 1059 by Pope Nicholas II. Lanfranc, at the time prior of Bec Abbey, negotiated the arrangement in Rome and it came only after William and Matilda agreed to found two churches as penance." 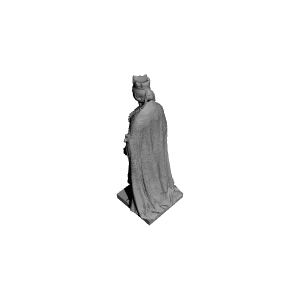 ×
1 collections where you can find Mathilde of Flanders at The Jardin du Luxembourg, Paris by Scan The World