Maurice Richard at the Jacques Cartier Park in Quebec, Canada

Maurice Richard at the Jacques Cartier Park in Quebec, Canada

Joseph Henri Maurice "Rocket" Richard, PC CC OQ (August 4, 1921 – May 27, 2000) was a Canadian professional ice hockey player who played 18 seasons in the National Hockey League (NHL) for the Montreal Canadiens. He was the first player in NHL history to score 50 goals in one season, accomplishing the feat in50 games in 1944–45, and the first to reach 500 career goals. Richard retired in 1960 as the league's all-time leader in goals with 544. He won the Hart Trophy as the NHL's most valuable player in 1947, played in 13All-Star Games and was named to 14 post-season NHL All-Star Teams. 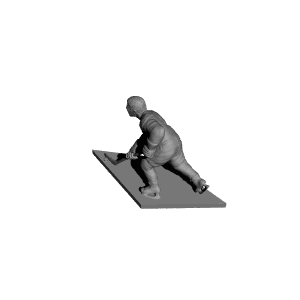 ×
4 collections where you can find Maurice Richard at the Jacques Cartier Park in Quebec, Canada by Scan The World
×
Jeff Tucker
@Darthtucker3d
1
Printed on: Anycubic Photon
Material: Resin
Posted at: 26th June 2022