3D
Scan The World
1,874 views 67 downloads
Community Prints Add your picture
Be the first to share a picture of this printed object
0 comments

This colossal statue depicts a member of the Hekatomnid dynasty, traditionally identified at Maussollos. The sculpture is made of Pentelic marble (the head, of Parian marble, and right arm of the statue were carved from separate blocks of marble and attached); found in fragments in the main deposit of sculpture outside the northern peribolos wall. It orgiginates from about 350 BC.

The colossal, dynastic portraits were probably positioned between the columns of the Ionic peristyle. Other fragments from male figures of this scale survive, which belong to the same series of portraits. The facial features reveal distinctly non-Greek characteristics: for example, the long hair, the thickened lips, the close-cropped beard and drooping moustache follow contemporary Asiatic fashion. The man wears a non-Greek garment, consisting of a long under-tunic of thick material. Over this he wears an himation (cloack) which is visible around the middle of his body and hanging down around his left side. He originally held a sword scabbard, of which a few fragments survive, in his left hand. This may have contained his sword, or alternatively he may have held it in his right hand.

This sculpture is paired with another, available here. 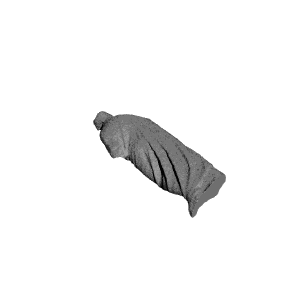 ×
0 collections where you can find Maussolos Figure (Male) at The British Museum, London by Scan The World