3D
Scan The World
4,126 views 387 downloads
4 collections
Community Prints Add your picture
Be the first to share a picture of this printed object
0 comments

This disk was carved into a limestone boulder. It served as the tombstone for a circular crypt found in 1993. It is associated with an earlier temple nicknamed "Motmot" beneath the Hieroglyphic Stairway. Cemented into the stucco floor, it has been referred to as the cornerstone for the ancient city of Copan. It has the earliest hieroglyphic inscription known from the site, commemorating the important 9.0.0.0.0 (December 8th AD 435) period ending and the final closing of the tomb beneath. 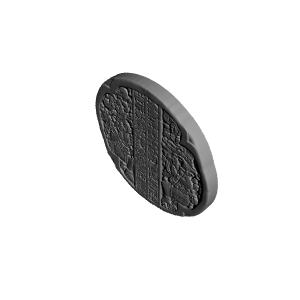