3D
Scan The World
2,653 views 99 downloads
3 collections
Community Prints Add your picture
Be the first to share a picture of this printed object
0 comments

Since its rediscovery in the nineteenth century, Maya art has been admired as the most accomplished of all Amerindian civilisations. Its beginnings lie in the first millennium BC at archaeological sites in Mexico, Guatemala, Belize and Honduras. By the early centuries AD, sophisticated vfarming systems supported large populations, leading to the growth of Classic Maya city states rules by competing dynasties.

The invention of hieroglypgic writing allowed the names, birth dates, marriage alliances, coronations, wars and the deaths of ruling lords to be recorded. Texts and figural scenes were inscribed on stone lintels and stelae and incorporated into the architectural fabric of temples, palaces and tombs. The inscriptions place major historical events within repeated cycles of time using a complex and precise calendar. The Maya believed that the world had been created and destroyed at least three times and that the last cycle of creation began on 13 August 3114 BC.

The Mesoamerican ballgame, pitz in Classical Maya, modern Spanish "El juego de la pelota") was a sport with ritual associations played since 1,400 BCE by the pre-Columbian peoples of Ancient Mesoamerica. The sport had different versions in different places during the millennia, and a newer more modern version of the game, ulama, is still played in a few places by the indigenous population.

The rules of ōllamaliztli are not known, but judging from its descendant, ulama, they were probably similar to racquetball,[3] where the aim is to keep the ball in play. The stone ballcourt goals are a late addition to the game.

In the most common theory of the game, the players struck the ball with their hips, although some versions allowed the use of forearms, rackets, bats, or handstones. The ball was made of solid rubber and weighed as much as 4 kg (9 lbs), and sizes differed greatly over time or according to the version played.

The game had important ritual aspects, and major formal ballgames were held as ritual events, often featuring human sacrifice. The sport was also played casually for recreation by children and perhaps even women.

Pre-Columbian ballcourts have been found throughout Mesoamerica, as for example at Copán, as far south as modern Nicaragua, and possibly as far north as what is now the U.S. state of Arizona. These ballcourts vary considerably in size, but all have long narrow alleys with slanted side-walls against which the balls could bounce. 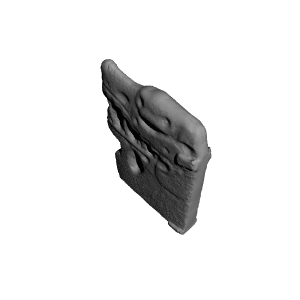 ×
3 collections where you can find Mayan football hoop at The British Museum, London by Scan The World