3D
4,584 views 136 downloads
5 collections
Community Prints Add your picture
Be the first to share a picture of this printed object
0 comments

This Drone was part of a game that I developed for help kids to enjoy the way that they learn things on the school.


Many centuries ago, the Egyptians were using the board games as entertainment and to train their thinking, and even today, board games are used for different purpose and in different ways.In order to meet the briefing, it was developed a board game for children and adolescents that are in the middle school and high school, and the main objective it is a game to feed the knowledge, stimulate creativity in developing a better strategy and a game that seeks ambition to win through resolutions of issues.This board game consist in a board similar to an island, where each hexagon in the board is a square of the board, which can be putted their pawns or bonus, and each player aims to dominate the largest number of houses, by advancing in the board and combating, where the player has to resolve a question on a subject already studied to move forward. The main idea of the game, he is open to the achievement of questions related to the subject studied in class, where the child or young person can play the game in a way to study and entertain in a subject that has difficulty.For those reason the board game is called EduCombat, a board game that can be used in times of studies of children and adolescents, regardless of the subject being studied, either, mathematics, biology, chemistry, etc.Moreover, a basic principle of EduCombat, it's a game of easy gameplay, multiplayer and has its aesthetic appeal through its board and pawns. Each board can be used and combined in various ways to bigger boards and for more players. Second, the pawns, besides being used in EduCombat has as secondary use, the proposal to be collectible, a value object that can stay on your shelf and also viewing their value as historical figures of our society or fictional characters that also has their stories. For example, the pawns of the Roman line, where there are Roman soldiers, controlled by Julius Caesar, Bigas, war vehicles used by the Romans, all then resemble the stories and lessons of past, actual or future events of our society.In addition, the EduCombat seeks sustainable use of their pawns not only in the game but as collectibles and exchangeable object, and also the use of new and renewable materials, which is the case, the use of PLA a biodegradable plastic derived from corn, given an advantage in the end of life of the against other board games, and by the use of the PLA the pawns of the EduCombat can be recycled to produce other objects or decomposed in nature, the same thing as the board, made from cardboard, a material that can be either recycled or decomposed.In conclusion, the game can be introduced in all environments, whether at home or school, your aim to entertain, teach, join people will have the same impact. 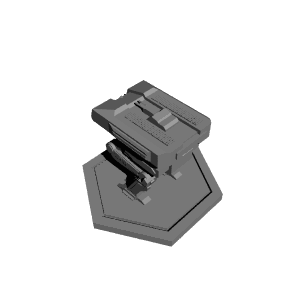