3D
Scan The World
4,198 views 428 downloads
5 collections
Community Prints Add your picture
Be the first to share a picture of this printed object
0 comments

Rather than facing straight ahead, Medusa's head is slightly turned to the left, her eyes looking in the same direction. with her full cheeks and childish face, she does not look menacing but rather smiling in suprise. The violence of her character is to be found in her thick eyebrows and her mane-like hair surrounding her face. The curls are represented in a highly symmetrical fashion and are crowned with a single curl raised high between two winglets. The snakes that should have formed her hair are represented with their tails knotted under her chin and their heads raised above her forehead. The harsh and deep carving of the white marble is typical of an object designed to be viewed in open air and at a distance. The medallion measures 102 cm; some reddish pigment can still be seen in the hairm and the eyes bear traces of black. 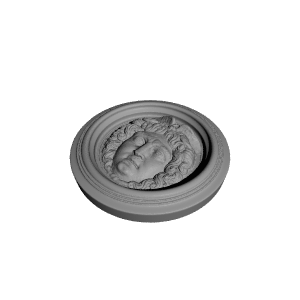