Medusa is a marble sculpture of the eponymous character from Ovid's classical myth. It was executed by the Italian sculptor Gian Lorenzo Bernini. Its precise date of creation is unknown, but it is likely to have been executed in the 1640s. It was first documented in 1731 when presented to the Palazzo dei Conservatori in Rome, and is now part of the collections of the Capitoline Museums.

The portrait draws on the myth of Medusa, the snake haired woman whose gaze could turn onlooking to stone. Unlike other depictions of the Medusa, such as Benevenuto Cellini's Perseus and Medusa and Antonio Canova's of the same name, the Medusa is not portrayed as a vanquished figure, her head severed from her body but as a living monster. Bernini's decision to create a marble sculpture may be some kind of visual pun on the myth - creating a stone version of a living creature that could turn men to stone - or even depicts a moment she perceives herself in an imaginary mirror and realisez she is being transformed. Her anguish at the metamorphosis is obvious as the tresses of her beautiful hair turn into writhing serpents .

Nothing is known about its creation, and parts of the sculpture's execution undermine Bernini's authorship of the sculpture, most notable the heavy, exaggerated eyebrows and the rough treatment of the snakes. Yet the sensual fleshy quality of the cheeks and lip, the polished precision of the face, the tormented face of the Medusa and lively intelligence behind the literary concept and its unusual treatment point to the work of Bernini This print is made on MakerBot Replicator Fifth Generation. The dimension of the model 66mm x60 mm x 100mm, Infill 20%, with support and layer high 0,2. Provides very nice results! 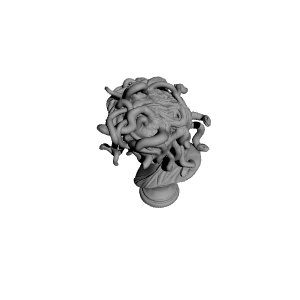 ×
88 collections where you can find Bust of Medusa at The Musei Capitolini, Rome by Scan The World
×
Peter Song
@PeterSong
1
Printed on: Zortrax M200
Material: ABS
Posted at: 26th May 2016

It was so hard to finishing job because of her hair.

Bust of Medusa at the Musei Capitolini, Rome Prior to infiltration with epoxy or superglue

Printed on ZPrinter450 and infiltrated very carefully with copper. Polished and Tiffany green patina applied. When distilled water is sprayed on, other colors emerge.

printed out nicely on my Elegoo, 60mm tall

Here is my print! Not perfect, but very happy with the result.

My daughter wanted me to print this, so this is my attempt. It turned out ok, but damn, those supports!

Long print, a lot of bondo sanding and ect. Love it 11 + inch wide and about 18 inch tall

26-hour print at about 150% using copper silk PLA. Not perfect, and I broke a few parts while trying to remove all the tree supports, but beautiful nonetheless.