3D
Scan The World
3,864 views 316 downloads
8 collections
Community Prints Add your picture
Be the first to share a picture of this printed object
0 comments

The over-lifesize Medusa Rondanini, the best late Hellenistic or Augustan Roman marble copy of the head of Medusa, is rendered more humanized and beautiful than the always grotesque apotropaic head of Medusa that appeared as the Gorgoneion on the aegis of Athena. The Medusa Rondanini is located in the Glyptothek in Munich, Germany,[1] having been purchased by the art-loving king Ludwig of Bavaria from the heirs of the marchese Rondanini, during his Grand Tour of Italy as a prince. 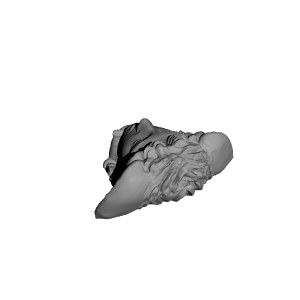