This is a 3D printer friendly version of the Medusa Rondanini that was created from the 3D scans found on Thingiverse (https://www.thingiverse.com/thing:196047).

ABOUT THE SCULPTURE: "The over-lifesize Medusa Rondanini, the best late Hellenistic or Augustan Roman marble copy of the head of Medusa, is rendered more humanized and beautiful than the always grotesque apotropaic head of Medusa that appeared as the Gorgoneion on the aegis of Athena. The Medusa Rondanini is located in the Glyptothek in Munich, Germany,[1] having been purchased by the art-loving king Ludwig of Bavaria from the heirs of the marchese Rondanini, during his Grand Tour of Italy as a prince." (Wikipedia, https://en.wikipedia.org/wiki/Medusa_Rondanini)

Printing should be easy. Requires very minimal supports. Models scales very well, so you can make any size. Print times iwll vary. I printed it using a copper metal filament that I patinaed post print. 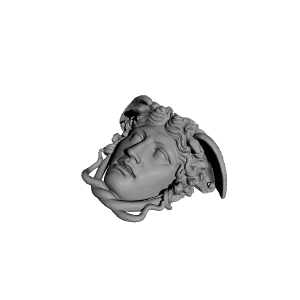 Made a latex mold and cast from concrete, painted with acrylics, sealed with satin acrylic sealer.