3D
Scan The World
3,082 views 59 downloads
Community Prints Add your picture
Be the first to share a picture of this printed object
0 comments

A megalith is a large stone that has been used to construct a structure or monument, either alone or together with other stones. The word "megalithic" describes structures made of such large stones, utilizing an interlocking system without the use of mortar or concrete, as well as representing periods of prehistory characterised by such constructions. For later periods the term monolith, with an overlapping meaning, is more likely to be used.

The word "megalith" comes from the Ancient Greek "μέγας" (transl. megasmeaning "great") and "λίθος" (transl. lithos meaning "stone"). Megalith also denotes an item consisting of rock(s) hewn in definite shapes for special purposes. It has been used to describe buildings built by people from many parts of the world living in many different periods. A variety of large stones are seen as megaliths, with the most widely known megaliths not being sepulchral. The construction of these structures took place mainly in the Neolithic (though earlier Mesolithic examples are known) and continued into the Chalcolithic and Bronze Age.

In the centre of Senegal exists a megalithic zone which spreads across 36,000 km2. Around 30,000 monoliths have been discovered aging from the 2nd Century BC as far back as the 16th Century BC. These stones, arranged in a lateral conglomerate, marks the gravestones or tombs of the area's ancestors. These monoliths often have very particular forms which has given the site of Soto (in the region of Kaolack, Senegal) the name of "Stone Lyre" 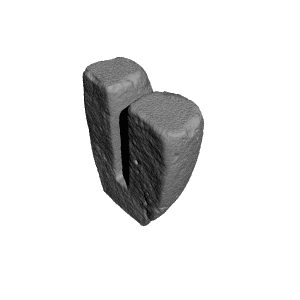 ×
0 collections where you can find Megalith at Quai Branly, Paris by Quai Branly