Pakhangba is the supreme God of the Meetei tradition that is used as a heraldic emblem in Manipur. It was present in most emblems of the Princely state of Manipur and it originated in Paphal, an ancient deity of the traditional beliefs preceding Hinduism in the region. This creature was said to inhabit sacred ponds and groves, as well as mountains, rivers, lakes, forests and caves. Among the Meeteis, the ancestor of one of the clans manifested himself as the Pakhangba.

There was also an important king named after this mythical man who ruled from 1665 to 1696. The title Pakhangba was also used by other royals in Manipuri history.

The Pakhangba is the supreme God. He is a man who can change his body to any form, like animals, and others as he is a powerful God. In certain sculptures, known as Kangla-Sa, at the citadel of the Kangla Palace in Imphal, there is a related type of creature represented with a short body. The sculptures are large and were built of brick, standing at each side of the northern gate. They have a similar head and four sturdy legs, but their body is shorter and bears more of a resemblance to a lion.

In 1891, during the Anglo-Manipur War five British officers were executed by Manipuri soldiers below these two Kangla-Sa. The act was a kind of magic ritual in which the blood of the white officers was seen as feeding there in order to weaken British power. For this act Major Maxwell, the Political Agent that was appointed after the war, had destroyed the two kangla-sa with gunpowder following the conquest of Manipur. 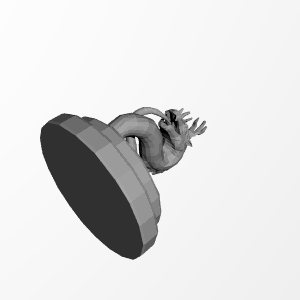