Meleager at The British Museum

3D
Scan The World
4,296 views 130 downloads
Community Prints Add your picture
Be the first to share a picture of this printed object
0 comments

Meleager at The British Museum

This bust, sculpted in the Fourth Century BC by Skopas of Paros, depicts the Greek mythological hero Meleager.

Meleager was the leader of the Calydonian boar hunt. The Iliad relates how Meleager’s father, King Oeneus of Calydon, had omitted to sacrifice to Artemis, who sent a wild boar to ravage the country. Meleager collected a band of heroes to hunt it, and he eventually killed it himself. The Calydonians and the Curetes (neighbouring warriors who aided in the hunt) then quarrelled over the spoils, and war broke out between them. In this war Meleager killed the brother of his mother, Althaea, and she cursed him. At one point the Curetes besieged Calydon; since Meleager refused to fight, the Curetes were on the verge of victory when Meleager finally joined the battle and repulsed them. The Iliad does not describe Meleager’s death, though it mentions that it occurred before the Trojan War. His mother caused his death by burning the log whose span of existence was coterminous with his. 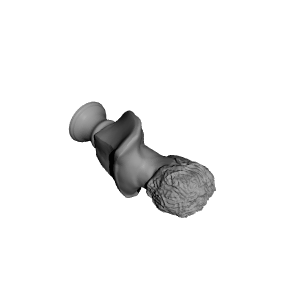