3D
Scan The World
1,712 views 126 downloads
3 collections
Community Prints Add your picture
Be the first to share a picture of this printed object
0 comments

This is a memorial of Sir Arthur Seymour Sullivan (13 May 1842 – 22 November 1900), an English composer. He is best known for 14 operatic collaborations with the dramatist W. S. Gilbert, including H.M.S. Pinafore, The Pirates of Penzance and The Mikado. His works include 24 operas, 11 major orchestral works, ten choral works and oratorios, two ballets, incidental music to several plays, and numerous church pieces, songs, and piano and chamber pieces. His hymns and songs include "Onward, Christian Soldiers" and "The Lost Chord".

The son of a military bandmaster, Sullivan composed his first anthem at the age of eight and was later a soloist in the boys' choir of the Chapel Royal. In 1856, at 14, he was awarded the first Mendelssohn Scholarship by the Royal Academy of Music, which allowed him to study at the academy and then at the Leipzig Conservatoire in Germany. His graduation piece, incidental music to Shakespeare's The Tempest (1861), was received with acclaim on its first performance in London. Among his early major works were a ballet, L'Île Enchantée (1864), a symphony, a cello concerto (both 1866) and his Overture di Ballo (1870). To supplement the income from his concert works he wrote hymns, parlour ballads and other light pieces, and worked as a church organist and music teacher.

Bronze bust on a pillar with on one side lines from The Yeoman of the Guard:

"is life a boon?
if so it must befall
that death whene'er he calls
must call too soon"

Against the pillar reclines an allegorical female figure, representing grief-stricken music. Around the base are musical instruments, a music score and the mask of comedy. 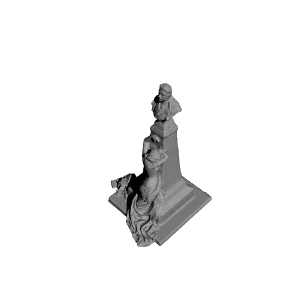