3D
Scan The World
1,607 views 95 downloads
1 collection
Community Prints Add your picture
Be the first to share a picture of this printed object
0 comments

This memorial statue depicts Samuel Johnson, often referred to as Dr Johnson, who was an English writer who made lasting contributions to English literature as a poet, essayist, moralist, literary critic, biographer, editor and lexicographer. He was a devout Anglican and a generous philanthropist. Politically, he was a committed Tory. The Oxford Dictionary of National Biography describes Johnson as "arguably the most distinguished man of letters in English history". He is also the subject of James Boswell's The Life of Samuel Johnson, described by Walter Jackson Bate as "the most famous single work of biographical art in the whole of literature" 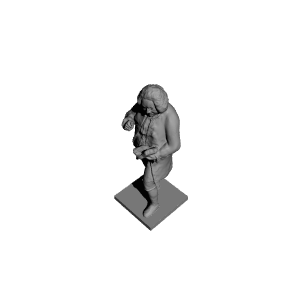