Menelaus holding the body of Patroclus

3D
Scan The World
3,983 views 309 downloads
5 collections
Community Prints Add your picture
Be the first to share a picture of this printed object
0 comments

Menelaus holding the body of Patroclus

Menelaus supporting the body of Patroclus is a marble sculpture so-titled due to its apparent representation of an episode in the Iliad featuring the characters Menelaus and Patroclus. The sculpture has a complex artistic and social history that illustrates the degree to which improvisatory "restorations" were made to fragments of ancient Roman sculpture during the 16th and 17th centuries, in which contemporary Italian sculptors made original and often arbitrary and destructive additions in an effort to replace lost fragments of the ancient sculptures.

The ancient nucleus of the sculpture, underneath the later additions, initially consisted of the headless torso of a man in armor supporting a heroically nude dying comrade; the group was made in the late 1st century AD, a Roman copy freely reproducing a Hellenistic Pergameneoriginal of the mid-3rd century BC.

Major restorations by Ludovico Salvetti, according to a mdoel by Pietro Tacca (1640) and bby Stefano Ricci (about 1830). Discovered in Roma; from 1570 property of the Medici in Florence; placed near Ponte Vecchio; in the Loggia since 1741. 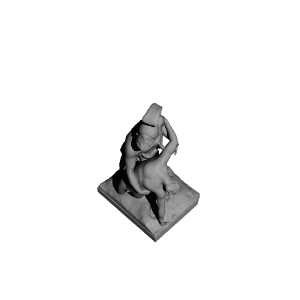