3D
Scan The World
2,999 views 120 downloads
1 collection
Community Prints Add your picture
Be the first to share a picture of this printed object
0 comments

The Merchandise Mart (or the Merch Mart, or the Mart) is a commercial building located in the Near North Side of Chicago,Illinois, United States. When it opened in 1930, it was the largest building in the world, with 4,000,000 square feet (372,000 m2) of floor space. The art deco landmark is located at the junction of the Chicago River's branches. The building is a leading retailing and wholesale destination, hosting 20,000 visitors and tenants per day as of the late 2000s. Built by Marshall Field & Co. and later owned for over half a century by the Kennedy family, the Mart centralized Chicago's wholesalegoods business by consolidating architectural and interior design vendors and trades under a single roof. It has since become home to several other enterprises, including the Shops at the Mart, the Chicago campus of the Illinois Institute of Art, Motorola Mobility, and the Chicago tech startup center 1871. The Merchandise Mart is so large that it had its own ZIP code(60654) until 2008, when the code began to be shared with part of the surrounding area. In 2010, the building opened up its Design Center showrooms to the public for the first time. In 1926, a westward extension of double-deck Wacker Drive increased development on the south riverbank. In 1927, Marshall Field and Company announced its plans to build on the north bank opposite Wacker Drive. The site, bordered by Orleans Street, Wells Street, Kinzie Street and the Chicago River, was formerly a Native American trading post and the site of Chicago and North Western Railway's former Wells Street Station, abandoned in 1911 in favor of the Chicago and North Western Passenger Terminal. With the railroad's air rights, the site was large enough to accommodate "the largest building in the world". Removing the train yard supported theChicago Plan Commission's desire to develop and beautify the riverfront.

James Simpson, president of Marshall Field and Company from 1923 to 1930 and chairman of the Chicago Plan Commission from 1926 to 1935, turned the first shovels of dirt atgroundbreaking on August 16, 1928, along with architect Ernest Graham. General contractor John W. Griffiths & Sons brought building construction into the machine age through the use of techniques "ordinarily used in the construction of big dams." Cement arriving by boat was lifted by compressed air to bins 75 feet (20 m) above the ground, with gravel and sand delivered by railroad cars to conveyor belts and transfer elevators. Giant mixersprovided wet concrete to skip hoists in vertical towers that were extended as the building rose. Continuously employing 2,500 men and as many as 5,700 men altogether, the construction project lasted a year and a half into the early months of the Great Depression. With a foundation footprint of nearly two square city blocks, the building required 29 million bricks, 40 miles (64 km) of plumbing, 380 miles (610 km) of wiring, nearly 4,000,000 cubic yards (3,100,000 m3) of concrete, 200,000 cubic feet (5,700 m3) of stone, and 4,000 windows. Bethlehem Steelfabricated much of the 60,000 tons of steel. An estimated 7.5 miles (10 km) of corridors and over 30 elevatorswere included in the construction. 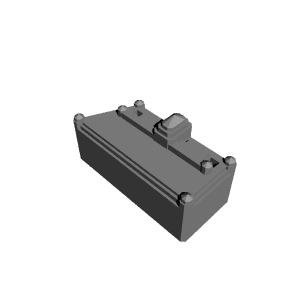 ×
1 collections where you can find Merchandise Mart in Chicago, Illinois by jkurstin22