3D
360°
Scan The World
1,945 views 146 downloads
2 collections
Community Prints Add your picture
Be the first to share a picture of this printed object
0 comments

This is one of two figurative sculptures which mark the entrance ot the 'sunken garden', a memorial to the 24,000 identified lives who were lost at sea during the Second World War (in total 32,000 lives were lost). Each of the flanking pylons represent a Merchant Navy soldier (on the east side) and an officer (on the west).

The walls of the garden are eight feet (2.4 m) high in Portland stone, to match the original memorial, with the names of the missing from the Second World War listed on 132 bronze panels fixed to the walls. The name panels circle the entire sunken garden, lining both the northern and southern walls, and the eastern and western walls.

Between the two statues is large plaque which notes the years of the war (1939-1945) and carries the memorial's dedication:

THE TWENTY FOUR THOUSAND OF THE MERCHANT NAVY AND FISHING FLEETS WHOSE NAMES ARE HONOURED ON THE WALLS OF THIS GARDEN GAVE THEIR LIVES FOR THEIR COUNTRY AND HAVE NO GRAVE BUT THE SEA. 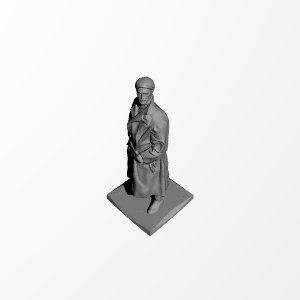 ×
2 collections where you can find Merchant Navy Seaman, Second World War memorial by Scan The World