Mercury bears Psyche aloft as he escorts her to Olympus where, after many adventures, she obtains immortality and is reunited with her lover Cupid. Adriaen de Vries's monumental bronze is a virtuoso work whose bold distribution of weight and spiraling movement create an impression of flight and invite the spectator to move around the sculpture.

At the turn of the 16th and 17th centuries, the German emperor Rudolf II (1552-1612) turned his capital city Prague into a major center of culture, home to astronomers (including Tycho Brahe), writers and artists. He drew many mannerist artists from Flanders to the city, such as the painter Bartholomaeus Spranger (whose Allegory of Law and Prudence is owned by the Louvre), and the sculptor Adriaen de Vries. This Dutchman, a brilliant pupil of Giambologna in Florence, cast two monumental masterpieces in Prague: Mercury Abducting Psyche, and Psyche Borne by Cupids (Stockholm).

Jealous of Psyche's beauty and furious at the union of this mere mortal and her son Cupid, the goddess Venus inflicted a series of trials on the young woman, who overcame them successfully. Psyche was granted immortality by Jupiter and forgiven by Venus. The messenger god Mercury took Psyche to Mount Olympus, where she was reunited with her lover. The Latin writer Apuleius (c. AD 125-170) relates this story in The Golden Ass.
Mercury is easily identifiable by his winged ankles and petasos (winged helmet). As in the Stockholm group, Psyche gracefully raises a vase in an allusion to the episode in which she had to risk going to the underworld to ask Persephone for some of her beauty potion.
In the intellectual context of Prague, the allegorical meaning of the sculpture cannot be disregarded. Mercury Abducting Psyche personify two concepts: Art and Genius. The group thus signifies that Art raises Genius to immortality. Such is the sculptor's proud assertion of the value of his work.

In this work, Adriaen de Vries appears to seek to push back the frontiers of sculpture and to surpass his master. He reworks Giambologna's bold distribution of weight in the gravity-defying Flying Mercury (a copy of which is in the Louvre), in which the messenger god's foot seems to be the only part of the statue still in contact with the ground. In de Vries's work, the drapery falling between the two bodies supports the group without affecting its lightness. The figures form a "knot of bodies" whose flowing, undulating lines spiral upward, giving an aerial feeling of elevation. The group invites the spectator to move around the statue and study it from its many different angles, none of which dominates, as in Giambologna's Rape of the Sabine Women (Florence, Loggia dei Lanzi). The svelte bodies, firm, smooth modeling, exaggerated elongation of the hands with slender fingers, the figures' graceful positions, and the energy in the movements are all characteristic of the mannerism spreading through Europe at the time, in Florence, Fontainebleau, and Prague. 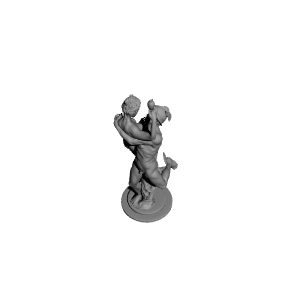 ×
17 collections where you can find Mercury Abducting Psyche at The Louvre, Paris by Scan The World
×
Peter Song
@PeterSong
1
Printed on: Zortrax M200
Material: ABS
Posted at: 27th January 2022

Different Color, different feeling !!! Which one is better for you? Please Enjoy it!

Very nice print with Resin on Elegoo Mars. Not easy to prepare all supports for one shot print but i'm really happy by the Sculpt and result. Thankt you :)

Print with Anycubic Skin tone resin at 0.04 mm layer. Time spent on Prusa Slicer for supports and really happy with the result :) Thank you !