3D
Scan The World
4,449 views 183 downloads
1 collection
Community Prints Add your picture
Be the first to share a picture of this printed object
0 comments

The inscription states that this figure was commissioned by the Venetian scholar Marcantonio Michiel and begun on 14 February 1527. His horoscope for 15 June appears on the bronze disc. With Mercury, the god of eloquence, in the ascendant, it was probably intended as a favourable omen for Michieli, who was hoping to gain a seat in the Venetian Senate.

This is a statuette of the Roman God Mercury, carved out of marble inlaid with bronze. Mercury is represented in full-length, and is naked save for a cloak clasped at the right shoulder, winged sandals and a winged helmet. Its origin of the is Padia, carved in 1527 by Antonio Minello (1460-1533). The bronze plaque is engraved with a diagram of the planets, showing the motions of Mercury, placed at the top, the relative positions of the planets on 15 June 1527, the date of the completion of the figure.

It has been interpreted as a horoscope by Hartner and Pope-Hennessy, with some differences as to the precise time, which Hartner places at 8.04 a.m. and Pope-Hennessy at 11.46 a.m. Pope-Hennessy argues that this shows Mercury in a particularly favourable position as Lord of the Ascendant and of the Midheaven, also in conjunction with the Sun and Jupiter, and that the moment was therefore clearly chosen with great care and must have some special significance for the career of Marcantonio Michiel. He explains this in terms of Michiel's repeated attempts to secure public office, with a particular desire to serve as ambassador, which were dashed in September 1525 as a result of a disgraceful confluct with a relative that caused him to be debarred from public office for a year. By 1527, when the statuette was commissioned, Michiel was free once again to try for office. In that month he married Maffea Soranzo, and began to scheme for election to the senate, in which he was finally successful on 28 September 1527. The peculiarly favourable conjunction of Mercury on 15th June 1527 would therefore have been a good omen for him. This interpretation has since been questioned by Fletcher, and more recently by Eade, who has brought into question the astrological status of the plaque. Observing that the earlier astrological calculations were wrong and that on 15 June 1527 Mercury was unfavourably positioned, Eade interprets the plaque not as a horoscope, but as a simple astronomical diagram showing the position of Mercury on 15 June 1527 in relation to other planets. The Mercury appears in the earliest inventory of Michiel's collection, probably compiled soon after his death in 1552, and in 1576 was in the possession of Michiel's grandson. as noted by Fletcher, who published the early inventory, the collection was housed in Michiel's palace at Santa Marina in Venice, where the Mercury appears to have been paired with a marble Apollo of similar scale and valued at the same amount.

There is no indication whether the Apollo was a classical or a modern work. It was conjectured by Pope-Hennessy that the pose of the Mercury was based on a classical statue of Hypnos of a type represented in the Prado Museum of which a number of examples survive. The Madrid Hypnos was at one time thought to represent Mercury. 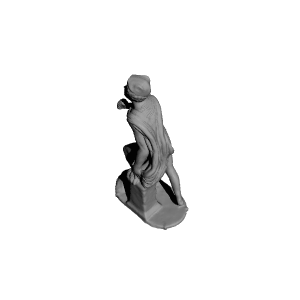 ×
1 collections where you can find Mercury by vam