Mercury Attaching his Wings at The Louvre, Paris

3D
Scan The World
5,279 views 455 downloads
2 collections
Community Prints Add your picture
Be the first to share a picture of this printed object
0 comments

Mercury Attaching his Wings at The Louvre, Paris

Pigalle's Mercury (approved in 1741) was executed for his admission to the Academy in 1744. The sculptor presented a significantly larger plaster model of this subject at the Salon of 1742, paired with a Venus; both statues were made in marble for the king, and presented in 1750 to Frederick II of Prussia.

Mercury, the messenger of the gods, is sitting on a rock, ready to leap up. He is attaching the winged sandals which, together with his petasus (winged cap), will enable him to take flight. The god's twisted position and the play of his limbs make the composition interesting to observe from every angle. Mercury is not looking at his talaria (winged sandals) as he attaches them, but his gesture is accentuated by the convergence of both arms and one leg. His crouched position, the upward slant of his limbs and shoulder line, and his face turned to scan the horizon, give an impression of dynamism — that Mercury is about to soar into the sky. The position of his left leg, with his weight on his toes, also suggests that the messenger god is ready for take-off. This pose was perhaps inspired by the Mercury and Argus by Jacob Jordaens (a 17th-century Flemish painter), popularized by engravings. But the play of diagonals and the multiple viewpoints afforded by sculpture in the round enabled Pigalle to add a vitality that transformed the figure of the god into an allegory of speed. Mercury's torso is a variation on the Belvedere Torso (in the Vatican); this antique marble fragment of a muscular seated figure has a strength that fascinated Michelangelo — and has continued to fascinate artists and art lovers. It was left incomplete, which was unusual for the 18th century, and thus became a metaphor for Time that destroys the creations of Genius. It symbolized sculpture, as it does in Jacques Buirette's 1663 reception piece, the bas-relief entitled The Union of Painting and Sculpture (in the Louvre).

When Pigalle returned to Paris in 1741 after a stay in Rome (1736–39), he presented his terracotta model of Mercury for approval by the Royal Academy of Painting and Sculpture; according to an anecdote, he had almost left the work as a pledge of payment for his accommodation when passing through Lyon. Instead of imposing another subject, the Academy asked him to transpose the model into marble for his admission piece, and he was accepted on 30 July 1744. Mercury was originally designed as an isolated figure, but in 1742, Pigalle added a matching piece: Venus Giving a Message, which illustrates an episode from the Golden Ass, a collection of tales by Latin author Apuleius (c. 125–170). In 1746, the Royal Administration commissioned Pigalle to produce a life-size marble sculpture of each figure; these works were completed in 1748, and presented by Louis XV to King Frederick II of Prussia for the park of the Sans-Souci castle near Berlin.

An instant and lasting success

The work was an instant success. In The Century of Louis XIV (1751), Voltaire compared it to the finest works of Greek antiquity. Many replicas were acquired by artists, and it featured in a number of paintings: the painter Chardin, a friend of Pigalle, used it to symbolize sculpture in his works The Drawing Lesson (1747, Vanas) and The Attributes of the Arts (1766, Minneapolis). A smaller version in biscuit porcelain was produced by the Sèvres manufactory as of 1770. 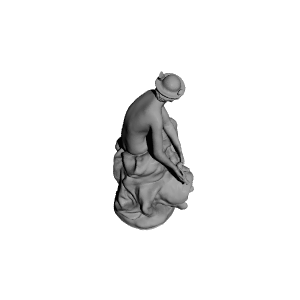 ×
2 collections where you can find Mercury Attaching his Wings at The Louvre, Paris by Scan The World