Mermaid at The National Gallery of Denmark, Copenhagen

Mermaid at The National Gallery of Denmark, Copenhagen

Mermaid (Danish: Havfrue) is a bronze sculpture designed by the Danish sculptor Anne Marie Carl-Nielsen, depicting a mermaid. The original bronze cast from 1921 is on display in the Danish National Gallery while another cast was installed at Christians Brygge outside the Royal Danish Library in Copenhagen in 2009. The original plaster model is owned by the Carl Nielsen Museum and is on display in the Funen Art Museum in Odense. Carl-Nielsen depicts her mermaid in a more dramatic pose than that of Edvard Eriksen's far more famous and nine years older Little Mermaid at Copenhagen's Langelinie prommendade.

Anne Marie Carl-Nielsen was a Danish sculptor. Her preferred themes were domestic animals and people, with an intense, naturalistic portrayal of movements and sentiments. She also depicted themes from Nordic mythology. She was "one of the first women to be taken seriously as a sculptor," a trend-setter in Danish art for most of her life. She was married to the prominent Danish composer Carl Nielsen. 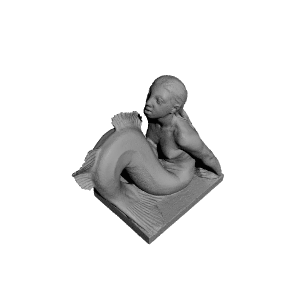 ×
7 collections where you can find Mermaid at The National Gallery of Denmark, Copenhagen by geoffrey.marchal
×
Rick Norris
@goaty_rn
7
Printed on: CraftBot 3D Printer
Material: PLA
Posted at: 19th October 2021