The Millennium Falcon, originally known as YT-1300 492727ZED, was a modified YT-1300 light freighter with a storied history stretching back to the decades before the Clone Wars and the rise of the Galactic Empire. It eventually fell into the hands of Lando Calrissian after a game of sabacc—but Calrissian himself lost the ship in another game of sabacc to the smuggler Han Solo several years later.

Solo and his Wookiee copilot, Chewbacca, became the ship's most famous and permanent owners, flying the Falcon during their smuggling careers and their subsequent work with the Alliance to Restore the Republic; a fateful trip to the planet Alderaan from Tatooine, ferrying Ben Kenobi and Luke Skywalker there, saw Solo and the Falcon embroiled in the Alliance's affairs and participating in the historic Battle of Yavin—during which Solo and Chewbacca flew the Falcon to save Skywalker from Imperial TIE fighters and allowed him to fire the shot that destroyed the Death Star. Despite Solo's insistence that he did not work for the Alliance, his misadventures continued to draw him back to the Rebels and Princess Leia Organa, and the Falcon was present for many pivotal battles of the Galactic Civil War such as the Battle of Hoth and the Battle of Endor—where Lando Calrissian and his copilot Nien Nunb flew alongside Wedge Antilles into the second Death Star's superstructure and fired the shots that spelled the massive battle station's destruction. 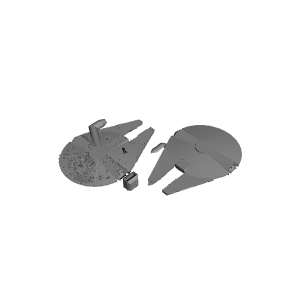