3D
Scan The World
2,899 views 258 downloads
Add to collection
3 0
Community Prints Add your picture
Be the first to share a picture of this printed object
0 comments

When the Greek athlete Milo grew old, he decided to test his legendary strength by trying to split open a cleft tree trunk; his hand remained trapped in the trunk, and he was devoured by wild animals. In this sculpture, he screams his helplessness, his eyes fixed on the lion, his muscles taut with strain. Falconet chose to treat this subject in order to pit himself against the sculptor Pierre Puget, an inescapable reference.

Ten years between the plaster model and the marble sculpture

The Royal Academy of Painting and Sculpture approved Falconet's plaster model on 29 August 1744, while reproaching him for the work's resemblance to that of Pierre Puget (in the Louvre). He was asked to create a different work for his reception piece: a Genius of Sculpture, the model for which was approved in 1745. However, the Academy then decided otherwise, instructing Falconet to make the marble of Milo. After a ten-year wait, Falconet was accepted into the Academy on 31 August 1754.

Falconet's choice and energetic treatment of his subject obviously stemmed from a desire to pit himself against his distinguished elder, for whom he had always professed great admiration. The Academy's suspicion of plagiary was clearly unjust, however. Puget's Milo is standing, pushing away the head of the lion that is biting him; if his other hand were not trapped, he would surely triumph. In Falconet's version, Milo is defeated, knocked to the ground, his right leg flailing in the air, his left straining in vain. The cleft in the tree is essential to Puget's composition, but secondary here. Puget concentrated on the suffering man, relegating the lion to the background; Falconet focused on the confrontation between man and wild animal, positioning their heads at almost the same level, setting savagery against pain. The lion's anatomy and expression are rendered with naturalistic vigor, whereas Puget's lion is almost heraldic.

The theatricality and virtuosity of this work are of baroque inspiration: the sweeping diagonals, the twisting of the bodies, the lifelike flesh, the opposition of light and shade, the paroxysmal expression (Milo's face was inspired by Bernini's Damned Soul, in Santa Maria di Monserrato, Rome). Falconet demonstrated his technical and compositional skill, his anatomical knowledge, and his mastery of foreshortening (with the figure of the lion). However, when he presented his marble sculpture at the Salon of 1755, its style clashed with the contemporary taste for antiquity: despite its generally favorable reception, it was soon criticized for lack of nobility. The naturalism of the sculpture offended: Falconet had idealized neither the body (he portrayed the folds of the abdomen and the hairs on the chest) nor the face (a self-portrait with snub nose). His vigorous portrayal of Milo also clashed with the classical ideal that required a dying hero to express stoic restraint. 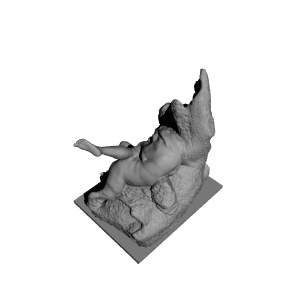