Milon of Croton at The Palace of Versailles, France

3D
Scan The World
4,519 views 248 downloads
1 collection
Community Prints Add your picture
Be the first to share a picture of this printed object
0 comments

Milon of Croton at The Palace of Versailles, France

Milo was a Greek athlete several times champion of the Olympic and Pythian games. As an old man, he wished to test his vigor by splitting a tree trunk that he found already cleft. His hand remained caught in the stump and he was devoured by wolves. Puget replaced these animals with the nobler figure of a lion and created a composition imbued with baroque passion and drama. Milo's body is writhing in pain and his flesh appears to be shuddering under the chisel's touch.

Colbert having granted Pierre Puget the right to carve three blocks of Carrara marble that had been left unused in the port of Toulon, the sculptor - born in Marseilles and trained in baroque Italy - began his Milo of Croton in 1671, completing it only in 1682.
The theme, foreign to sculpture until then, is not only a meditation on the victory of time over strength, but also on man's pride. Milo is vanquished above all by his vanity and his denial of the weakness attendant to his age. His pain is as much moral as physical. Human glory is ephemeral, as signified by the symbol of the cup won at the Games and now lying on the ground, a worthless object.
It is rather puzzling that Puget selected such a subject for a work destined to the king. He was to manifest the same audacity again with his bas-relief ofAlexander and Diogenes, also in the Louvre.

Although each side of the sculpture was treated with equal virtuosity, Puget did nevertheless favor the frontal angle. The work is meant to be seen either facing the spectator or in a three-quarter view. Milo's writhing, aching body is an immense zigzag: a succession of three diagonals decreasing in size, culminating with his head thrown back in a cry of agony.
The body is arched against the tree trunk that forms the axis around which the composition pivots. In the center, two large openings were cut into the marble in order to detach the athlete's silhouette from the background. This hollowing-out of the base is a rare occurrence in sculpture and represents a technical feat.

Puget certainly had in mind the Hellenistic group of Laokoon, a sculpture in the pope's collections, which to the artists of the time epitomized the image of heroic pain. In this piece, the Great Priest of Troy, a very old man, dies a stoic death, strangled by the snake sent by the gods. Puget, however, decided to create a modern piece. He did not idealize the representation of the hero and substituted the violent expression of suffering for the serenity of the Ancients. The body here is arched with pain and the face reduced to a grimace, while the tensed toes seem to claw the ground. When the sculpture was unveiled at Versailles in 1683, Queen Maria Theresa is said to have exclaimed: "Poor man!" The beautiful cuts of Puget's chisel make us forget that we are looking at marble. The lion's claws appear to plunge into real flesh. The muscles seem to stretch and the veins to bulge under our eyes. The modulations of the surface render the impression of shuddering flesh.
The sculptor opposed the extremely smooth finish of the body and the rougher aspect of the other elements. The lion's fur is carved with a burin; the trunk and ground are streaked with a point. Puget thus distinguished the story's three actors - man, beast, and nature - through variations in the treatment of the surface. 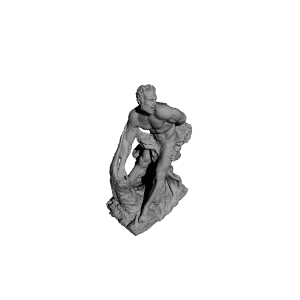 ×
1 collections where you can find Milon of Croton at The Palace of Versailles, France by Scan The World