Minerva, also known as the Mazarin Alexander at The Louvre, Paris

3D
Scan The World
5,488 views 571 downloads
3 collections
Community Prints Add your picture
Be the first to share a picture of this printed object
0 comments

Minerva, also known as the Mazarin Alexander at The Louvre, Paris

Cardinal Mazarin (1602-1661) created the Mazarin collection both in Rome and Paris, where he accumulated a collection of antique artworks from both cities. Upon his death in 1665, aside from the bust of Louis XIV which is stored in the Palace of Versailles and partial disptribution to the Louvre before the Revolution, the majority of his work remains at the Mazarin Palace in Paris.

This bust is first written about between 1653 and 1661 whilst it was still part of Cardinal Mazarin's collection. Interestingly the bust was originally intended to depict Alexander the Great, probably for the sake of competing with Richelieu's famous play in Versailles. Now identified since its purchase in 1665 as the Goddess Minerva, the work seemingly reproduces either the Athena/Pallas of Velletri (also on Scan the World) or the Mattei Athena at The Louvre (Ma 530). 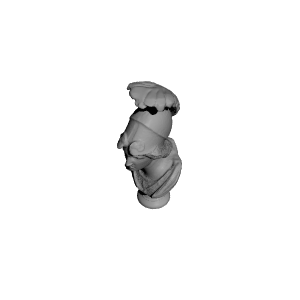 ×
3 collections where you can find Minerva, also known as the Mazarin Alexander at The Louvre, Paris by Scan The World