The Fountain of Minerva in Brussels, Belgium

3D
Scan The World
3,881 views 241 downloads
1 collection
Community Prints Add your picture
Be the first to share a picture of this printed object
0 comments

The Fountain of Minerva in Brussels, Belgium

The Minerva fountain (Dutch, Minervafontein) is a fountain erected on the Place du Grand Sablon in Brussels thanks to a bequest of Lord Thomas Bruce, 2nd Earl of Ailsebury and 3rd Earl of Elgin, in gratitude to the city for the hospitality he had received during his exile. The sculpture was crated by Jacques Bergé and replaces a fountain since 1751 created in 1661 which used to be a swamp called Zavelpoel.

On the base of the fountain on either lateral face has two Latin inscriptions , the work of writer Roberic de Cologne, a close adviser of the Duke Charles de Lorraine. The first text is of the Earl of Ailsebury and Britain (Magnae Britanniae), thanking the city in saying that the fountain was erected in recognition of enjoyable and wholesome hospitality (Hospitio jucondo and salubri) during his stay there of 40 years. The second inscription mentions that his heir John Bruce, having recovered possession of his father's estate, did perform these provisions eleven years later, in 1751, while "peace was strengthened in all the earth" . The two main faces of the base are decorated with coats of arms of Count Ailesbury. At their base two breathers each pour water into a basin supported by bluestone stairs. On each side of eaters masks are engraved the first three and the last three letters of the Latin phrase Fuimus ("we were"), family motto Bruce remembering that they were king of Scotland in the fourteenth century.

The base is topped by a group marble white Genoa by the sculptor Jacques Bergé (1693-1756), who was executed after a drawing of Count Calemberg, representing the goddess Minerva sitting holding a medallion with the portraits Empress Maria Theresa and Francis of Lorraine. Beside him stand two putti representing geniuses, one carrying a trumpet symbolizing Fame, the other a pitcher symbolizing the Scheldt. Behind the goddess stands a third genius as a putto holding his spear (disappeared) and shield head of Gorgon. The group was placed November 4 1751 Day of St Charles Borromeo, and bears the signature of J. Bergé Bruxell. And the date 1751. 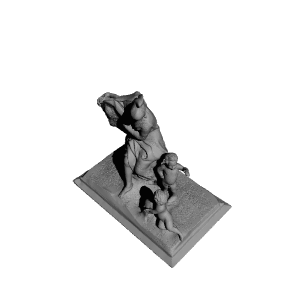 ×
1 collections where you can find The Fountain of Minerva in Brussels, Belgium by Scan The World