3D
Scan The World
2,352 views 93 downloads
Community Prints Add your picture
Be the first to share a picture of this printed object
0 comments

René Leleu was born in Lille on 11 June 1911. He studied at the École des beaux-arts in Lille from 1927 to 1929. He was a pupil of Aimé-Gustave Blaise in Lille. Leleu then studied under Paul Landowski and Marcel Gaumont at the École nationale supérieure des Beaux-Arts in Paris. He won the Prix de Rome in 1939. Due to World War II (1939–45) he was unable to study in Rome, but was given a scholarship by the French Academy to stay at the Villa Paradiso in Nice, and then at Fontainebleau. After the war Leleu devoted himself almost exclusively to monumental sculpture. He created the Monument à la Résistance of Bohain in 1946. He then spent seven years to complete the Minotauromachie, which he showed at the Salon de la Jeune Sculpture in 1957. He taught sculpture and art history at the École des beaux-arts in Valenciennes from 1950 to 1959. He was then made a lecturer at the U.P. d'Architecture in Rouen. René Leleu created one of the bronze sculptures for the Mémorial de la France combattante at Mont Valérien in 1960. It depicts a phoenix rising from its ashes, and represents the liberation of Alençon on 12 August 1944, the first step towards Paris and Strasbourg. He was a founding member of the Salon Comparaisons. He died in Paris in 1984.

NOTE: I took a lot of photos of this because of how much detail there is. Please pick the ones you think are best. I'm happy to take more if need-be. Printed in HIPS at 0.1mm layer height. Support was used sparingly as this model has a lot of nooks and crannies, but also because the material used is very good at spanning gaps. 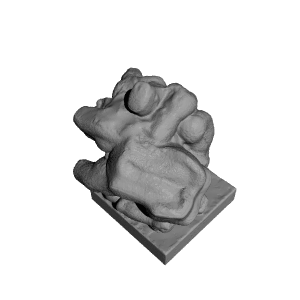 ×
0 collections where you can find Minotaurmachie in Valenciennes, France by Scan The World