3D
3,311 views 93 downloads
1 collection
Community Prints Add your picture
Be the first to share a picture of this printed object
0 comments

4486 Mithra (1987 SB) was discovered on September 22, 1987 by E. Elst, V. Ivanova, and V. Shkodrov at the Bulgarian National Observatory in Smolyan. Mithra (a = 2.20 AU, e = 0.66, i = 3.0!) belongs to the Apollo class and it crosses the orbits of both Earth and Mars. Its perihelion lies just outside the orbit of Venus, so it also makes close approaches (<0.02 AU) to this planet. Mithra has an absolute magnitude of 15.6, suggesting a diameter of roughly 2 km, but otherwise its physical properties are unknown.

This one was printed cut out in two parts, layer 100 micron 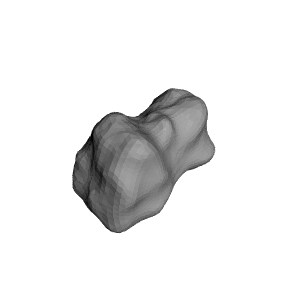 ×
1 collections where you can find Mithra by NASA