3D
Scan The World
6,481 views 500 downloads
Community Prints Add your picture
Be the first to share a picture of this printed object
0 comments

Although there are numerous minor variations, the basic features of the central tauroctony scene is highly uniform: Mithras half-straddles a bull that has been forced to the ground and invariably appears in profile, facing right. Mithras looks back over his right shoulder up to Sol (statuary that shows Mithras looking at the bull or towards the viewer are the result of Renaissance-era restorations of monuments that were missing a head). The bull is held down by Mithras' left leg, which is bent at an angle and the knee of which presses down on the bull's spine. The bull's rump and right hind leg is restrained by Mithras' right leg, which is almost fully extended. 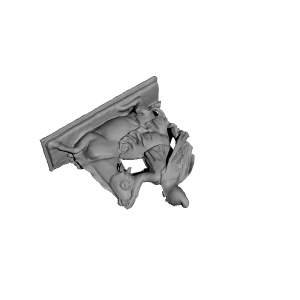 ×
0 collections where you can find Mithras Sacrificing the Bull at British Museum, London by Scan The World