3D
Scan The World
3,572 views 301 downloads
2 collections
Community Prints Add your picture
Be the first to share a picture of this printed object
0 comments

In April 2011, an Easter Island Head replica, or Moai, was carved out of an 11-foot Torrey pine stump in Encinitas’ Swami’s Park.  This sculpture was declared a temporary public work of art, due to the nature of the carved material and environmental decay.  Over a year later, the statue still stands proudly, showing only some signs of beetle infestation.

The sculpture at Swami’s is a beautiful and fitting representation of the original Polynesian monolithic statues carved from stone, mostly between the years 1250 and 1500 CE, on the Chilean Easter Island. The Moai were created by the indigenous Rapanui to honor their deified ancestors.  They are commonly referred to as “tiki” or “Easter Island heads”, due to their disproportionate size, although they are whole-body statues.  Moai are known for their large, broad noses, strong chins and rectangle-shaped ears.  Normally, the statues are in a squat position, with arms resting.

The iconic sculptures have been theorized in the news recently.  According to a report in the July issue of National Geographic, a study suggests that the massive stone heads were ‘walked’ with ropes by the natives, from the main quarry to stone platforms around the island’s perimeter.  Much mystery and intrigue has surrounded Easter Island and the transportation of the original 33-foot tall, 80-ton structures.  Rapanui lore says that the Moai, animated by mana, a spiritual force conveyed by powerful ancestors, were not transported; they walked.

Given the history the Rapanui endured, such as, famine, civil wars, slave raids and deforestation, the resilience of the Swami’s Easter Island head sculpture is appropriate.  Attempts will be made to preserve the wood statue, but only time will tell, if and when, nature will get the best of it. (source) 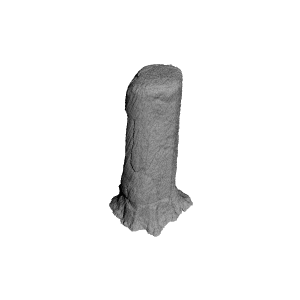 ×
2 collections where you can find Moai Head in Encinitas , California by Scan The World