3D
Scan The World
3,706 views 125 downloads
1 collection
Community Prints Add your picture
Be the first to share a picture of this printed object
0 comments

This moai is special as it is the only one with legs. Legend has it that at the top of volcano Rano Raraku, there are big man-made holes called pū makari, meaning "zip-line holes". According to oral tradition, tree trunks were placed in these holes, and a rope was pulled all the way to Ahu Tongariki. Whenever they had some free time, the statue builders used this rope to do zip-lining, or canopy. One person called Vai Ko Veka fell when he did this, and he died. When he was dead, laying on the ground, his legs were folded together, so it looked like he was kneeling. When his friends then made a statue for him, they made a kneeling statue. The true name for this statue would then be Moai Vai Ko Veka.

The moai are monolithic statues, their minimalist style related to forms found throughout Polynesia. Moai are carved in relatively flat planes, the faces bearing proud but enigmatic expressions. The human figures would be outlined in the rock wall first, then chipped away until only the image was left. The over-large heads (a three-to-five ratio between the head and the trunk, a sculptural trait that demonstrates the Polynesian belief in the sanctity of the chiefly head) have heavy brows and elongated noses with a distinctive fish-hook-shaped curl of the nostrils. The lips protrude in a thin pout. Like the nose, the ears are elongated and oblong in form. The jaw lines stand out against the truncated neck. The torsos are heavy, and, sometimes, the clavicles are subtly outlined in stone. The arms are carved in bas relief and rest against the body in various positions, hands and long slender fingers resting along the crests of the hips, meeting at the hami (loincloth), with the thumbs sometimes pointing towards the navel. Generally, the anatomical features of the backs are not detailed, but sometimes bear a ring and girdle motif on the buttocks and lower back. Except for one kneeling moai like the one here, the statues do not have clearly visible legs.

Though moai are whole-body statues, they are erroneously referred to as "Easter Island heads" in some popular literature. This is partly because of the disproportionate size of most moai heads, and partly because many of the iconic images for the island showing upright moai are the statues on the slopes of Rano Raraku, many of which are buried to their shoulders. Some of the "heads" at Rano Raraku have been excavated and their bodies seen, and observed to have markings that had been protected from erosion by their burial.

All but 53 of the more than 900 moai known to date were carved from tuff (a compressed volcanic ash) from Rano Raraku, where 394 moai and incomplete moai are still visible today. There are also 13 moai carved from basalt, 22 from trachyte and 17 from fragile red scoria. At the end of carving, the builders would rub the statue with pumice.

Easter Island statues are known for their large, broad noses and strong chins, along with rectangle-shaped ears and deep eye slits. Their bodies are normally squatting, with their arms resting in different positions and are without legs. The major of the ahu are found along the coast and face inland towards the community. There are some inland ahu such as Ahu Akivi. These moai face the community but given the small size of the island, also appear to face the coast.

In 1979, Sergio Rapu Haoa and a team of archaeologists discovered that the hemispherical or deep elliptical eye sockets were designed to hold coral eyes with either black obsidian or red scoria pupils. The discovery was made by collecting and reassembling broken fragments of white coral that were found at the various sites. Subsequently, previously uncategorized finds in the Easter Island museum were re-examined and recategorized as eye fragments. It is thought that the moai with carved eye sockets were probably allocated to the ahu and ceremonial sites, suggesting that a selective Rapa Nui hierarchy was attributed to the moai design until its demise with the advent of the Birdman religion, Tangata Manu.

Many archaeologists suggest that "the statues were thus symbols of authority and power, both religious and political. But they were not only symbols. To the people who erected and used them, they were actual repositories of sacred spirit. Carved stone and wooden objects in ancient Polynesian religions, when properly fashioned and ritually prepared, were believed to be charged by a magical spiritual essence called mana." Archaeologists believe that the statues were a representation of the ancient Polynesians' ancestors. The moai statues face away from the ocean and towards the villages as if to watch over the people. The exception is the seven Ahu Akivi which face out to sea to help travelers find the island. There is a legend that says there were seven men who waited for their king to arrive. 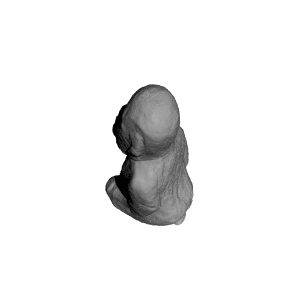