Model of the Final Version of the Design of the Monument

3D
Scan The World
2,022 views 76 downloads
1 collection
Community Prints Add your picture
Be the first to share a picture of this printed object
0 comments

Model of the Final Version of the Design of the Monument

A gift for inspiring his sculptures with a message of monumentality earned Otakar Svec victory in the 1949 competition for the monument to Stalin at Prague's Letna park, a project combining sculpture with architecture (the monument's architects were Jiri Stursa and Vlasta Stursova). Here, Stalin was presented in the dual role of leader and thinker: a towering presence standing serenely at the front of a line of allegorical figures of workers, peasants, intellectuals, and soldiers arranged in a relief composition flanking the protagonist. The realization was based on a three-meter high model (to a scale of 1:5). Svec, who still managed to add a few adjustments prior to its completion, died by his own hand before the monument's unveiling. His last work outlasted him by a mere seven years, as following the official renunciation of the cult of Stalin's personality, his statue was removed. 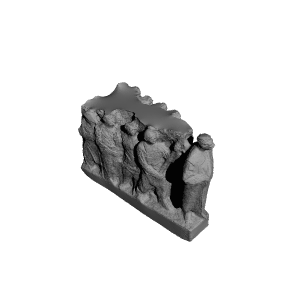