3D
2,747 views 123 downloads
Community Prints Add your picture
Be the first to share a picture of this printed object
0 comments

At the battle of Thermopylae in 480 BC (as dramatised in the movie '300') a force of 300 Spartan warriors held the narrow pass into their kingdom against a force of Persians numbering in the hundreds of thousands.  When the Persians demanded that the Spartans lay down their weapons King Leonidas reportedly shouted 'Molon Labe!', (pronounced 'MOW-lon la-BEY') which roughly translates as 'Come and take them!'.  Down the centuries the phrase has come to be a shout of defiance, to never give up and never lie down and be defeated.  Even to this day the phrase is still used, as people learn about the sacrifice of Leonidas and his men and honour their courage and service to their country.  This pendant is for all those who never give up, never admit defeat and continue to show their defiance in the face of overwhelming odds (whether on the battlefield or just taking your exams!)

This design is also available to be ordered from my Shapeways store in a variety of different materials - https://www.shapeways.com/shops/enterprisexddesign.  Order yours today! 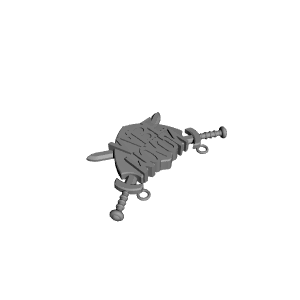 ×
0 collections where you can find 'Molon Labe' Pendant by EnterpriseXDDesign