3D
Scan The World
4,624 views 692 downloads
5 collections
Community Prints Add your picture
Be the first to share a picture of this printed object
0 comments

This statue is one of the three bronze monks (waiting monk Ambrosius, praying monk Bartholomeus, and watching monk Claudius) in the Danish King Garden, Tallinn. These sculptures are believed to depict monks from the legend of the Danish flag. The monks might have prayed with the Danish king for godly intervention during a losing battle. Later, the  Denmark was up one flag and Estonians were out of freedom. 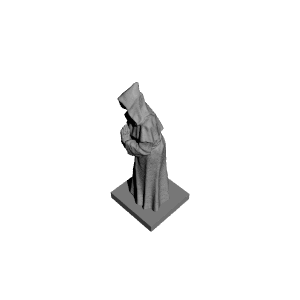