Monkey Playing the Harp at The British Museum, London

3D
Scan The World
1,748 views 67 downloads
Community Prints Add your picture
Be the first to share a picture of this printed object
0 comments

Monkey Playing the Harp at The British Museum, London

A monkey squatting on a cushioned footstool (forming the plinth), his head turned to his right, his tail curving under him, playing a triangular harp which rests on his knees. The harp has a divided knobbed top and is slightly injured. The animal may be wearing a hooded cloak, but this is uncertain. The back, which has considerable surface damage, shows a certain amount of modelling, including the rear of the harp and the monkey’s left arm and hand plucking the strings. What may be striations of drapery are indicated behind the head. There is a circular vent.
Hollow; two-piece mould. Micaceous orange-brown Nile silt with a buff surface in places, and some white grits. The front has traces of a white dressing, and yellow paint adorns the upright and top of the harp. 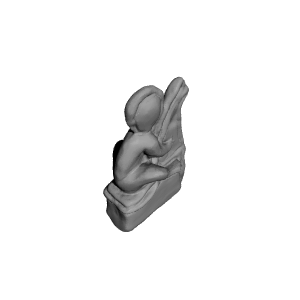 ×
0 collections where you can find Monkey Playing the Harp at The British Museum, London by Scan The World