3D
Scan The World
3,643 views 279 downloads
2 collections
Community Prints Add your picture
Be the first to share a picture of this printed object
0 comments

In October of 2006, just to the west of the Templo Mayor, a monolithic carving of Tlaltecuhtli was found. The iconography of the monolith reflects the intricate nature of his background. According to Mexica creation narratives, he was originally a sea monster and one of four original earth deities until Tezcatlipoca and Quetzalcoatl tore him in half to make the skies and the earth. However in order to produce the stars of the sky and the rivers and trees of the earth he would be forced to recycle the bodies of the dead into the features of the natural world.
As a result of being driven into this cosmic niche, he is typically seen confined or contorted to convey a sense of his captive and uneasy state. The arms-raised depiction specifically labels him as an earth deity, further alluding to the sense of internment in Tlaltecuhtli’s tale. The artist likely carved the stone to make Tlaltecuhtli appear as large as possible, restrained by the confines of the physical borders. Though he engulfed the dead, his role was still seen as a necessary evil to sustain life and provide the materials the Aztecs relied on for survival, and potentially prosperity. 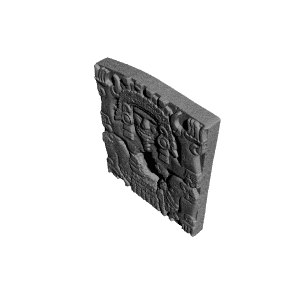