3D
Scan The World
3,337 views 110 downloads
Community Prints Add your picture
Be the first to share a picture of this printed object
0 comments

The order to portray a subject who had died decades earlier did not faze Bernini. Working from a painting, the soon-to-be famous baroque artist summoned up the beloved uncle of his friend Matteo Barberini, newly elected Pope Urban VIII. Bernini chose a massive but harmonious bust form, with the truncation below echoing the arc of the slightly turning shoulders. Shadows play over Francesco's aged face, especially in the sunken temples and beneath the bushy eyebrows. The sculptor's drill has pierced dark wells in the beard. Through movement, varied textures, and manipulation of light, Bernini contrived to animate the image of a man he had never seen in life. 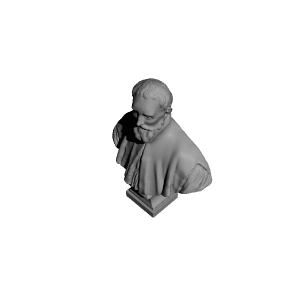 ×
0 collections where you can find Monsignor Francesco Barberini by 3DLirious