Montuemhat holding a Stela at The British Museum, London

3D
Scan The World
3,333 views 97 downloads
Community Prints Add your picture
Be the first to share a picture of this printed object
0 comments

Montuemhat holding a Stela at The British Museum, London

This grandiorite statue depicts a kneeling statue of Montuemhat holding a stela; it was made in either the Twenty-fifth or Twenty-sixth Dynasty, about 670-650 BC. It was probably from Montuemhat's tomb at Thebes.

The stela held up by Montuemhat shows him offering to Atum-Khepri, one of the many forms of the Sun God. The text is a hymn to the setting sun, taken from Spell 15 of the Book of the Dead. The text on the back pillar is an appeal to the local god of the owner to protect him. This statue and a similar one in Cairo were almost certainly set up in Montuembat's tomb. 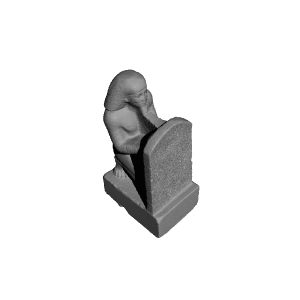 ×
0 collections where you can find Montuemhat holding a Stela at The British Museum, London by Scan The World