The character is sitting near the snake and on his head has a snake head. His right arm has a bag and his left arm is on his body. He have a very special costume and was an important character related to religion. It is the first representation of the Feathered Serpent God, which was from the Olmec era, a symbol of water that was fertilizer and fertilized the land within which vegetation and food of human beings was made. And the Serpent was a new form that explained the mysteries of fertility and resolved on it. As the Serpent is upwards it is also related to the sky since the water came from above, but it was also in the sea and the rivers of the Gulf Coast of prehispanic Mexico.
Discovered by archaeologists in 1955. 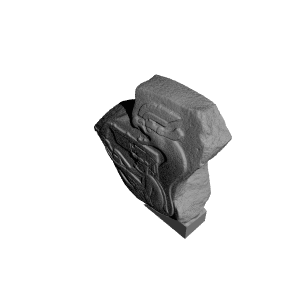 ×
2 collections where you can find Monument of La Venta by Scan The World
×
Peter Vercammen
@3dpeter1
1
Printed on: Tevo Tornado
Material: PLA
Posted at: 24th June 2022

Thank you for sharing